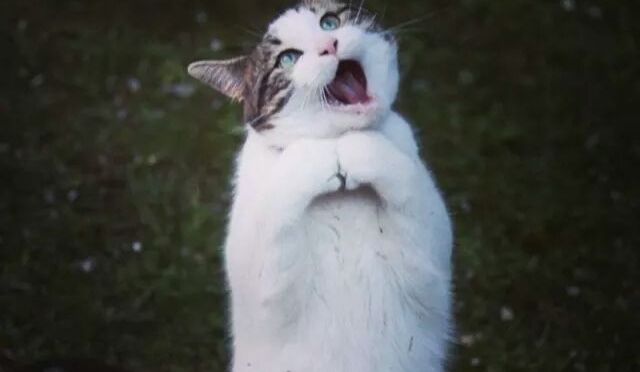 No, not really. Although it was one of the things we were worried about when we found out that we were expecting. You never really know how animals will behave around children, especially newborns.

We rescued a kitten a year ago and to us he’s great craic, albeit a bit feisty at times. But yeah, he’s an animal at the end of the day, so we absolutely had to remember that. He’s our little Shadow. He’ll purr and rub, but you don’t really know what he’s thinking. It’s all fine and well us batting him off, but a baby can’t really do that.

So we were a little worried. If it came down to it and Shadow reacted badly towards the baby then unfortunately he’d be finding a new home. Yes, we love him, but we have to make the right choice for our little one.

So the big day came and it was time to bring home the baby. Which would also be the first day my new wife would be coming home, but that’s a whole different story. We were nervous and unsure of what would happen. We brought little Anna-Marie in, gave Shadow a treat and let him relax. Shadow reacts badly to noise by the way. Yeah, newborns, they make noise I hear (literally). She shrieked and he just looked at her and went back into his nap. So far so good.

Apparently cats can enter a loving and protective mode with kids. We were about to see that. We did everything slowly and didn’t force her on him. We were upstairs feeding her and he came up, looked at her, sniffed her and then turned his back and watched the door for us, remaining alert. He continues to do this now, he’ll sniff, have a look and then stay nearby. When she cries he comes and has a look, sees that we are there and then he’ll just standby. Brilliant, we get to keep our first kitten with our first child.

Things are working out great with him and I’m genuinely delighted. However, that doesn’t mean I’ll make him head babysitter. He’ll never be left alone with her and she’ll have to learn his limits too, when she’s old enough of course. As long as we don’t forget that he’s an animal and that animals have animal instincts then I think we’ll be fine.

Overall, animals and babies, yeah, it can work out fine. Just keep an eye on them.

One thought on “The Cat’s in The Cradle”